Daša Šašić Šilović has been awarded the Silver Rose in the “Together for Social Europe” category, but her personal story is unmistakably intertwined with the Central and Eastern (CEE) Gender Network, a regional leader on gender equality, and also a member of SOLIDAR.

Since its establishment as a result of this dynamic approach the CEE Network has become a valued partner of socialdemocratic and progressive parties in the region and their foundations, as well as to the PES (observer member), PESW (member), FEPS (observer, member of the social care core group), FES, S&D Group. It has gone beyond the socialdemocratic family and been one of the first members in the NATO Civil Society Advisory Panel, a partner to UNDP and many other organisations such as the European Partners for the Environment. Last year it has been appointed “Ambassador” for the European Pillar of Social Rights by the EU DG EMPL.

In contact from Zagreb, Daša has kindly agreed to share her story and experience to continue the tradition of highlighting our Silver Rose winners´ work:

Thank you Daša for your time! We would first like to know: how would you describe the context in which CEE Gender Network was conceived?

Thirty years ago, when the euphoria (the thrill and the angst) of democratic change hit the CEE region, it was not easy to see the trees from the forest, to keep a cool head and wisely tread along the path of transition and democratic transformation.

Sitting in my kitchen in Manhattan I had the luxury to look at the process with a “cool” head. I followed the developments, the hasty measures to move to a market economy applying an overwhelmingly neo-liberal model, to introduce new cultural norms (and often kitch from the West as the quickest and cheapest variation) and reforming the social system to conform to the new economic model.  Overall, quite a political and social confusion with economic and social consequences bugging the region even today.

What most struck me in this process was that the status of women and equality was going to change, especially with the fast return to the traditional patriarchal system, supported by the newly found “aggressiveness” of the clergy (of all dominations) and  advocated by the new political conservative forces. And the signs were clearly to the detriment of women and that we may have to go back to the drawing board.

So... this is when you decided to take action?

Indeed: something had to be done.  I contacted my colleagues in the socialdemocratic family, having been associated for a long time with the Socialist International, and in 1994 we formally established the CEE Network for Gender Issues in Bratislava. The conference under the auspices of the former Chancellor of Austria, Heinz Fischer and then President of the European Forum for Democracy and Solidarity (EFDS) brought together socialdemocratic feminist politicians (mostly women but also men) from Eastern Europe and their counterparts in Western Europe. I was appointed Chair of the CEE Gender Network International Board. Later the Slovenian politician and feminist Sonja Lokar was nominated its Executive Director. Together we initiated the OECD Stability Pact for South Eastern Europe Gender Task Force which was especially instrumental in supporting women in the post-war recovery of Bosnia and Herzegovina.

Time flies. And here we are – more than twenty five years down the road working for women, with women, with women and men for gender equality. Looking back, this has been a rewarding, albeit sometimes thorny, trip. So much has been achieved. Equality legislation enacted, laws changed, quotas adopted, electoral lists and systems improved to reflect parity on the party lists, number of women in parliaments tripled in the region, labour laws changed, fighting violence against women has become a societal issue and cause. In socialist, social-democratic and progressive parties gender equality is today not an “if” but a “must” and a “given”.

How do you see this path, so far?

Societal development is not a linear and a once-for-all guaranteed process. So much remains to be done to make gender equality a reality. The hardest and most persistent are patriarchal values, regress in the name of “safeguarding” the nation, its traditions and cultures, persistent chauvinism and more aggressive right wing, conservative and clerical approaches to the individual and his or her rights including sexual orientation, reproductive rights, the role of the family in modern society and the concept of gender as a social construct. It seems as if we have successfully built the discourse and legislative frameworks but the foundations of a socially just, human rights based society are still wobbly and elusive. As a result, gender equality remains a litmus test for the state of democracy and human rights in any given country.

In the quarter of a century of its existence the CEE Network for Gender Issues has, based on a firm belief that women’s rights are human rights, accompanied the changing social, political and economic environment and arising challenges with recommendations on corresponding policy options, approaches and tools.

All these achievements could not have been possible without the constant support of the European Forum for Democracy and Solidarity and the Olof Palme International Center. Since development and progress are constantly changing social categories, sustained support for longer stretches of time gives results. One-time shots do not work.

And what is your approach to these new times and new challenges?

An organization, a network, a movement are like living organisms - changing, mutating in sync with political, social and economic developments. It is a dynamic and consuming process running a network, strategizing around its challenges, keeping in step with changing realities, needs and demands and designing mid-term and longer-term strategies. Organisation and networks “move”, they change but sometimes they just die out because they become irrelevant and unable to keep in line with the times. It is important to keep one’s ear to the ground, to feel but also anticipate calls for support, ideas for change, diverse needs of women and their communities. Results are important and monitoring each step and learning are paramount for success. Leaders need to have an open mind and a keen ear…

Controlling the COVID-19 pandemic and the immediate healing is a priority. But the pandemic has unearthed the fissures and structural deficiencies in our societies and governing systems. It is a wake-up call and an unexpected, possibly catalytic, opportunity to forge a new European sustainable future. The progressive and socialdemocratic family, to its credit, is pro-active in proposing transformative policies for a just transition, more equitable social Europe, ambitious and bold recovery plans based on sustainable strategic choices.

Is there any work you are particularly proud of, and want to highlight?

Today, I am especially proud of the women and men who have joined our Network Board, its Advisory Council and who participate in our activities. Our Board is made up of feminist high level politicians: Zita, Tamara, Mojca, Kalinka, Lovorka, Pia, Marta, Emina, Pavle, who bring with them different views, competencies and political and country experiences but we all work towards the same goals – to make our countries and the region socially just, economically and environmentally sustainable - where gender equality, and equality and solidarity in general will become a reality. This is a tall task, but our, albeit modest contribution has been recognized and felt.

Change cannot happen just by civil society action – it needs political conduits and leaders and partnerships. Unfortunately, partnerships between socialdemocratic and progressive parties and the civil society are not a given – it is often burdened by a mutual distrust and inability to forge coalitions on the “bigger” progressive platform. The CEE Network has especially focused on this aspect and successfully bridges that gap in the interest of a rapprochement and broader impact. The Korčula School Think Tank, established in 2011 as an annual meeting, serves that purpose. It brings together feminist politicians, women and men, to debate how to transform politics in all spheres – the economy, social policy, labour and environmental policies from a gender disaggregated perspective.

You have mentioned the unavoidable COVID19 context: can you deepen your answer focusing on women, and the gender perspective, in the pandemic?

Women have bourne a sizable burden caused by the COVID-19 pandemic and lockdown. They represent the majority of medical staff, caregivers, domestic workers, teachers, service and social workers. Lockdown measures have resulted in multiple problems for women and families – from domestic violence, increased childcare challenges including home education. financial hardships, especially for part-time and seasonal workers. Through a differentiated needs approach and gender sensitive lens to the new strategies and allocation and use of EU resources, we can ensure that gender equality concerns are mainstreamed in our future policies.

The CEE Gender Network has taken a pro-active stance – support, promote, advocate for a transformation of our policies beyond recovery. The 2020 autumn is going to be the biggest test of our abilities and political savvy. We need to “restart” and “retool”, to address the consequences of neo-liberal policies on our social welfare systems, synchronise the new labour patterns and social structures and address inequalities, including gender inequalities, and rising poverty. The “phoenix” Europe cannot have gender equality as an afterthought but an integral part of its political decision-making, economic, fiscal and social policies. The European Union has to support sustainable development and human capacities in its neighbourhood because, after all, we are one continent that needs stability and progress. Maybe this is the opportunity for this “restart” as we did after the Second World War...

Thank you Daša once again! For all the reflections you have made around your committed work: it also help us to understand your story and your struggle.

Thanks to you. I am really honoured, but also humbled, by the Silver Rose award that was bestowed on me by SOLIDAR and the S&D Group. While it is an appreciation of my life trajectory in politics and social affairs, it is for me especially an appreciation of my colleagues in the CEE Network for Gender Issues, and their contribution to making our societies better, safer, more just and equal. We look forward to our future joint efforts to promote gender equality and social justice in these turbulent and challenging times!

And by the way, all these issues will be further discussed by policy makers from the region and the European socialdemocratic family at our 2020 Korcula School (28-30 August 2020). So, stay tuned! 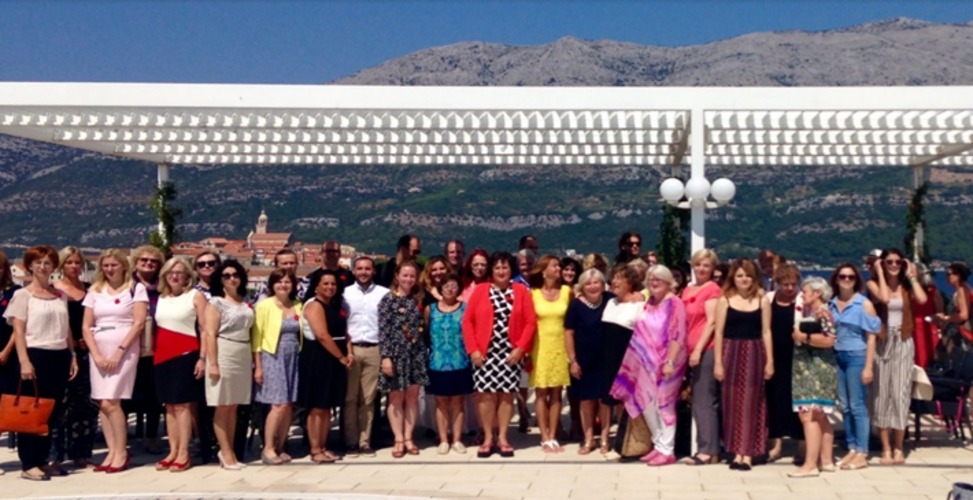