On 10 October, NGOs and trade unions together with civil society will mobilise in Berlin for a big demonstration against TTIP, the trade and investment partnership agreement currently being negotiated between the EU and the US.

One of the main concerns around this agreement is the foreseen investor-state dispute settlement mechanism for private investors. This so-called ISDS would allow companies based in the US to sue EU governments for loss of profit if they feel encumbered by national legislation (e.g. stricter environmental or health legislation). The same goes in the other direction for EU companies being able to sue the US administration.

This issue has sparked protest not only in civil society and the trade unions but also on the progressive-left political spectrum. Following a resolution by the European Parliament in July calling for a revised ISDS system, EU trade commissioner Cecilia Malmström presented her proposal for reforming the controversial investor-state dispute settlement mechanism in the context of trade agreements.

The new proposal might be a step in the right direction for trade agreements where dispute settlements are needed (e.g. for countries with under-developed legal systems or politically unstable situations). But for an agreement between two trading blocs with highly developed legal systems, a separate court procedure for private investors to sue governments is not necessary. The new court system would remain a private arbitration body, outside the legal system, created for the benefit of corporations to challenge governments and their regulation. This proposal will not lessen the widespread resistance against TTIP all across Europe.

But we are not only concerned about TTIP. The trade agreement between the EU and Canada (CETA), whose negotiations have been concluded and which currently awaits ratification, is also worrisome. CETA contains the “old” ISDS proposal that was supposed to be introduced into TTIP. This carries the risk that US based corporations could sue EU Member States’ governments through subsidiaries in Canada and thereby bypass ISDS provisions in TTIP.

Aggravating the situation is the fact that newly leaked documents reveal that ISDS mechanisms “played no role whatsoever in the opening of the negotiations, at least for the EU. The corresponding investment protection clauses were only added to the negotiating directives two years later, in 2011.” This shows that ISDS has never been an indispensable part of CETA – and therefore neither for TTIP - as the Commission keeps claiming.

SOLIDAR will continue its work in the framework of trade policy to protect social services, high labour standards and the exclusion of private arbitration systems. SOLIDAR is currently advocating for the exclusion of social services from the Trade in Services Agreement (TiSA) which is about to be discussed in the European Parliament. 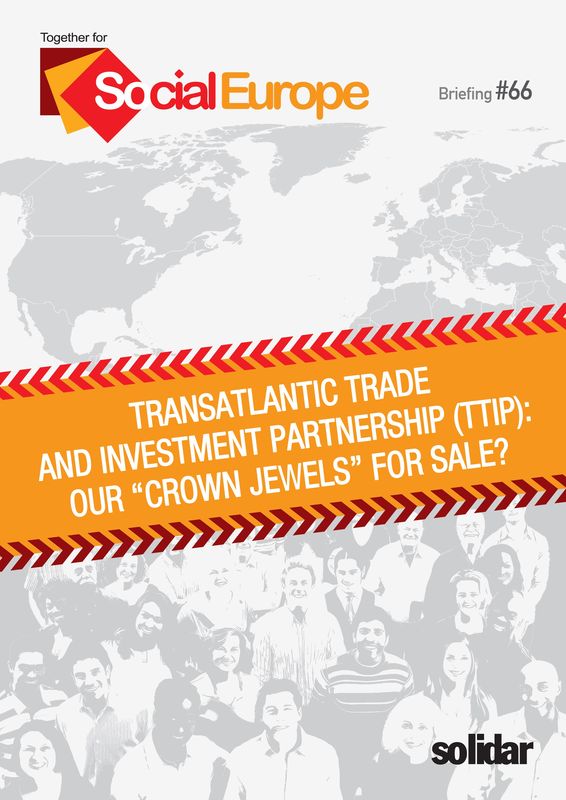 Transatlantic Trade and Investment Partnership: Our crown jewels for sale?