The programme of the 2022 edition of the Civil Society Days, an annual event organised by the European Economic and Social Committee (EESC) to enhance the dialogue between Civil Society Organisations (CSOs) and EU institutions, included the workshop "Building a Democratic Economy for a Just Transition" co-organised by SOLIDAR, Social Economy Europe, Cooperatives Europe and EEB.

The workshop gathered CSOs, trade unions, social economy actors and policymakers for a timely discussion on the imperative of taking transformative action that brings social, environmental and economic sustainability together. Speakers highlighted that, in line with the objective of reaching climate neutrality by 2050, we must re-shape our economies and make them more socially just, inclusive, equal and democratic. Civil society plays a central role in this paradigm shift, and CSOs are at the front of the transformation, which requires strengthening the engagement of citizens through civic and social dialogue, as well as ensuring their meaningful participation in shaping the policies around the green transition.

By bringing together experiences and best practices by trade unions, social economy actors, social movements and climate and environmental organisations, the workshop put the spotlight on a number of important initiatives taking place at local, national, and European level to tackle the ongoing climate and social crises. Simona Fabiani, Climate, Environment and Territory manager of the Italian General Confederation of Labor (CGIL), a member organization of SOLIDAR, presented the Just Transition platform created by CGIL, CISL and UIL in Italy, which calls for a radical change in our economies, with a strong role of the State, with interventions for social justice and for European environmental goals, also in recovery and resilience plans post pandemic. Trade unions in Italy believe in the need for democratic and participatory process involving trade unions and communities, as well as for stronger EU policies and funds for a just transition, with concrete measures for creation of new jobs and to reduce the impact of the transition on the most vulnerable. For CGIL, the energy transition objectives must be strengthened and accelerated to reach the 1.5°C goals and, also in light of the war in Ukraine, to reduce energy dependence and energy costs.

Oliver Röpke, President of the EESC Workers' Group, stressed that, without decisive environmental measures, we will have to face a social collapse of untold consequences. However, without social justice, those measures will not be enforceable. Therefore, as trade unions, the questions we will have to answer is how to put social, environmental and economic sustainability on equal footing, because only then we will be able to build a democratic economy for a Just Transition.

SOLIDAR Secretary General Mikael Leyi closed the workshop with a strong call for a new economy:

"We must move away from the current capitalist model oriented at infinite economic growth, from neoliberal policies and austerity measures, and adopt a socio-ecological economy centred around people and care, in which the well-being of both people and planet constitute the framework for all policies - policies that drive a Just Transition to climate neutrality.​

Transforming our economies requires joint efforts by all sectors and actors in society, from mayors, trade unions, civil society, cooperatives, social economy enterprises and more. We need to come together in alliances that drive this change, engage with all stakeholders and get involved in the implementation of a Just Transition for all. That is why SOLIDAR created the European Alliance for a Just Transition."

Conclusions from the workshop included calls on the EU to, on the one hand, ensure meaningful participation of stakeholders through effective social and civil dialogue and using various forms of citizens’ engagement and participatory democracy, and, on the other, support and foster existing solutions, such as energy communities, broad just transition alliances and social economy initiatives. In addition, participants called for stronger cooperation among all stakeholders, breaking the existing silos and boosting altogether a bottom-up, historic transformation of our economies and societies. A transformation that aims to reach climate neutrality, but also to increase well-being, inclusion and cohesion, and to build an economy that works for both people and the planet.

Click here to read the full report from the workshop.

Find all recommendations from the Civil Society Days 2022 via this link.

Watch the recording of SOLIDAR's workshop "Building a Democratic Economy for a Just Transition", as well as of all other sessions on the Civil Society Days 2022, on the EESC webpage. 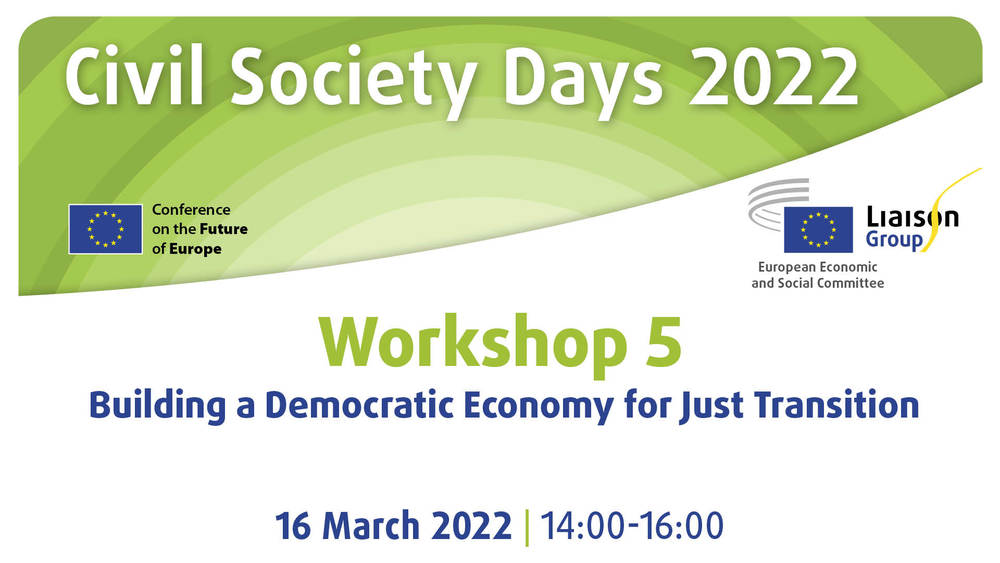