Today in Europe there are more than 14 million people below 30 years old who are Not in Employment, Education or Training (NEETs). This outrageous high number should wake up every single policy maker in the EU and should be fought with the needed ferocity, commitment and investment. Although structural youth unemployment has existed throughout the past decades, the numbers reached during the peak of the economic crisis threaten the future of an entire generation. While the EU has spent hundreds of billions of euros rescuing its banks, it may have lost an entire generation of young people in the process. Even though it seems that most EU countries are slowly able to control the incredible high NEETs rate, more efforts need to be done on the side of the EU.

The SOLIDAR Foundation works closely with its members on youth issues such as NEETs and the interlinked problem of early-school leaving (ESL). SOLIDAR Foundation recently published a policy paper that brings together a background paper on early school leaving and a case study by our Member organisation Volunteering Matters from the United Kingdom. In our recommendations, we underline that focused actions at local and regional level are of the utmost importance for tackling the problem of NEETs and that further engagement and investments in lifelong learning are needed to ensure that young Europeans can be empowered to participate in society and find new employment opportunities. The outlined recommendations as well as the good examples of re-integrating NEETs and early-school leavers in education and lifelong learning could serve also as a tool to integrate young migrants and refugees.

Besides this thematic policy paper, the SOLIDAR Foundation also focuses on NEETs and ESL in its Education and Lifelong Learning Watch (LLL Watch) initiative, where we monitor the development and commitment of national governments towards learning societies. Out of the resulting 13 country studies Austria, Croatia and Ireland are of particular interest with regards to NEETs and ESL. On the one hand, Austria’s NEETs rate is one of the lowest in the EU, with a rate of 8.7%, as compared to an EU average of 17 % in 2013. This may be explained by its very well developed vocational education and training system, as well as the Youth Guarantee in place. Ireland and Croatia on the other hand are doing well in terms of early school-leaving (ESL), as the early school leaving rate are well below the EU target of 10% (EU average is 12%). 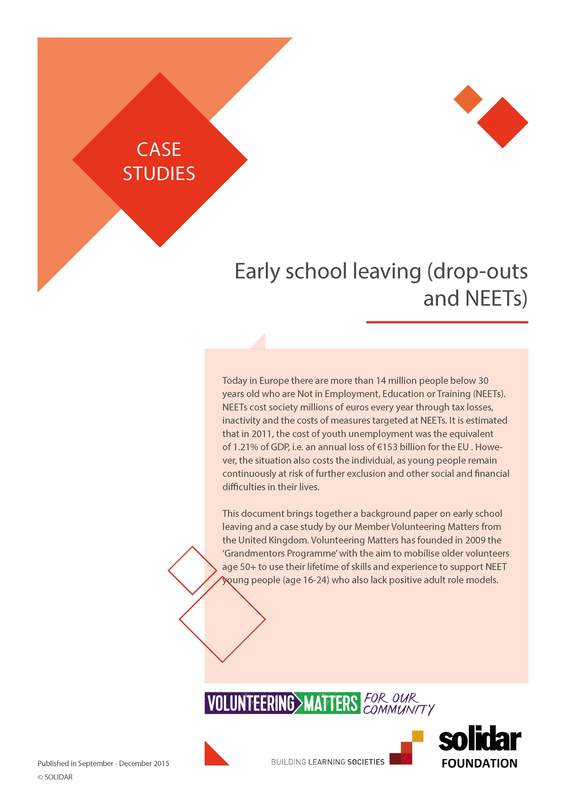