On Tuesday, October 10, the European Commission and the European Economic and Social Committee (EESC) organised a conference to discuss the most recent developments presented in the 2017 review on Employment and Social Developments in Europe (ESDE): Intergenerational Fairness and Solidarity, with the participation of main actors on the topic, including SOLIDAR.

SOLIDAR has been calling for an annual overview - finally published despite a significant delay - of the most important social and employment-related developments in the EU. This review gives a comprehensive and detailed picture of the social situation in Europe.

Commissioner Marianne Thyssen highlighted the main inter-generational concerns linked to long-term demographic and economic changes, which have been compounded by more acute crisis-related challenges. Although increases in the pension systems have improved income for the elderly in relative terms over the last decade, pensions remain a challenge in terms of higher contribution rates for people in work and lower pensions for retired people. Added to this burden, the effects of increasingly fragmented working careers will impact further on future pension entitlements.

The ESDE 2017 confirms positive labour market and social trends and continued economic growth. Besides the economic progress, evidence shows that there is a particularly burden on younger generations: they tend to have more difficulty finding a job and they are more often in non-standard and precarious forms of employment ,including temporary contracts which may lower their social protection coverage.

New labour market and social trends have had a negative impact on young people’s economic independence and their capacity to establish independent households. Postponing households may in turn have adverse inter-generational consequences on the sustainability of pension systems and growth, as well as on perspectives in general.

As the SOLIDAR briefing on the Employment and Social Developments in Europe (ESDE 2017) Report states, the European Pillar of Social Rights presents a good opportunity to tackle these restrictions and ensure high-level social standards for everyone living in Europe. The European Semester should also be an instrument firstly for encouraging sustainable economic development, secondly for the fair distribution of the resources between generations, and thirdly it should address the potential need for changes in the set-up of the welfare state which facilitate inter-generational solidarity.

SOLIDAR welcomes the ESDE 2017 and points to the fact that the report has much positive data that gives cause for hope, but at the same time it stresses a lot of restrictions to these positive developments. Please find out more in the SOLIDAR briefing on the ESDE 2017 Report here. 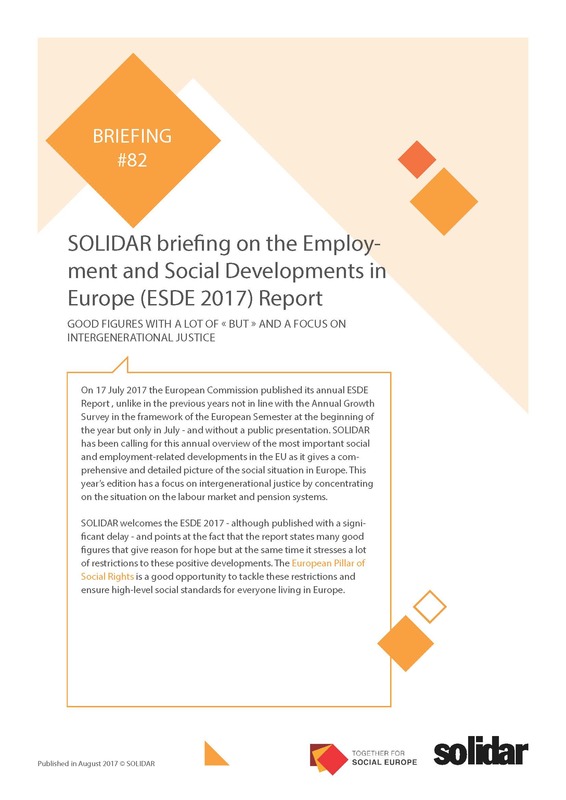 ESDE Review 2014 – Structural reforms not at the cost of social cohesion and inclusive societies!