For a Pillar of enforceable and universal social rights

On 6 December SOLIDAR organised the conference “European pillar of social rights – Achieving upward social convergence with a rights-based approach?” to present the network’s recommendations for a stronger social Europe based on the findings of our Social Progress Watch 2016.

The Social Progress Watch 2016, a tool implemented by SOLIDAR members and partners for the third consecutive year in 15 countries all over the EU, shows once more the growing social disparities between and within Member States. Not only does spatial inequality still persist,  but also growing discrimination against third country nationals when it comes to access to their economic, social and cultural rights, observed our network. These developments signify a potential decline in the realisation of certain rights granted by the Charter of Fundamental Rights of the EU and Art. 9 TFEU.

SOLIDAR advocates for a rights-based approach that builds on comprehensive and integrated social policies based on high-level social standards that are applicable in all EU Member States in order to upgrade labour law and social protection systems in the EU. SOLIDAR calls for a Pillar which is legally binding and not only a declaration of principles. The Pillar should be a driver for upward social convergence in the EU. SOLIDAR’s Secretary General used the expression “posterity” to define what is needed in the EU to reverse the logic of austerity and foster social investment: a strong Pillar of enforceable and universal social rights can be a way to support this transition.

Invited to reflect on the main findings of this year’s Social Progress Watch, Rudi Van Dam, Chair of the Social Protection Committee’s Indicators Group, confirmed that many of the trends identified by SOLIDAR focus groups in Member States are in line with the findings of the Social Protection Committee’s indicators on the social situation in the EU. In his presentation he showed some progress in the employment rates and a slight decrease in the long-term unemployment rate in the EU, although both the youth unemployment rate and the rate of people at risk of poverty has improved.

Eve Geddie, vice-director of the Platform for International Cooperation on Undocumented Migrants (PICUM), pointed out that undocumented migrants do not seem to be covered by the scope of the Pillar of Social Rights. There are four million undocumented migrants in the EU and they are at risk of exploitation in the labour market as well as being the target of the growing anti-migrant sentiment among citizens and authorities. For the Pillar to have a comprehensive and rights-based approach, it is important that undocumented migrants are also included in it and that Member States are pushed to guarantee their social rights at the level of international standards.

Last but not least, Marina Monaco, policy adviser at the European Trade Union Confederation (ETUC), expressed full support for SOLIDAR’s recommendations for the Pillar to guarantee enforceable rights and uphold principles. She underlined that the communication of the European Commission on the Pillar does not mention any financial means to be used to achieve the goals set.

On the same evening, the debate about the Pillar continued in a second high-level debate titled “How to build the European Pillar of Social Rights?” co-organised by SOLIDAR and the German Trade Union Federation (DGB), the Austrian Trade Union Federation (ÖGB), Friedrich-Ebert-Stiftung (FES), the Austrian Federal Chamber of Labour (AK Europa), Diakonie Deutschland and the European Social Observatory (OSE) at the premises of the Representation of the State of North Rhine-Westphalia. This debate was joined by Allan Larsson, the Special Advisor for the European Pillar of Social Rights to Commission President Juncker, Maria Joao Rodrigues Member of the European Parliament, Rapporteur of the Employment and Social Affairs Committee on the Pillar, Ester Lynch, European Trade Union Confederation, and Josef Wöss, Austrian Chamber of Labour and Ruth Paserman, deputy Head of Cabinet of EU Commissioner for Social Affairs, Marianne Thyssen.

The evening was also the occasion to present the campaign “Social Rights First!” calling for Decent Work and fairer economies, better wages and higher living standards for all workers in the EU, which SOLIDAR joined and strongly supports. 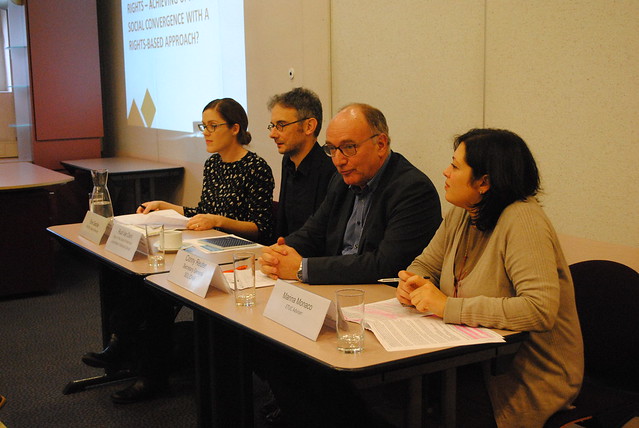 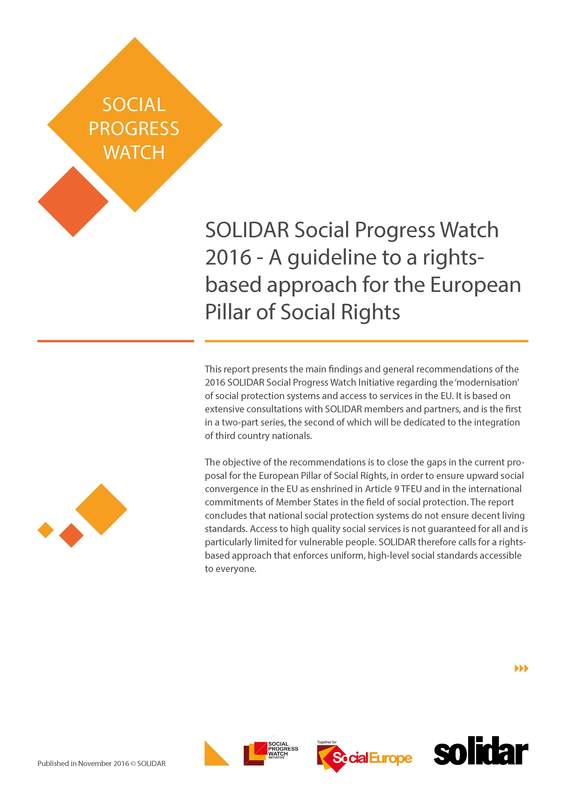 Presentation | EPSR on SPC monitoring of the social situation