Inside Orban’s crackdown on Hungary’s civil society: how European values are at the heart of the Budapest resistance

Inside Orban’s crackdown on Hungary’s civil society: how European values are at the heart of the Budapest resistance

It was time for the European Parliament to take a firm stand on Hungary. Last Wednesday, MEPs made an unprecedented move with a majority vote to trigger article 7 of the Lisbon Treaty, a legal procedure which could lead to tough sanctions on Hungary in response to fundamental breaches. It was their reaction to a Member State repeatedly infringing basic human rights and democratic values, gradually reverting to authoritarian rule, with dire consequences.

In calling for “illiberal democracies” in Europe, PM Viktor Orbán has not only targeted Soros-funded organizations working in the field of education and migrants’ right but also pensions, the rule of law and women’s rights. In a bid to understand how this populist nationalist movement is affecting public spaces and civil society, the SOLIDAR Foundation network decided to go on a study visit to Budapest.

The study visit, on 13 and 14 September, was the first since this summer’s anti-immigration laws, and included participants from various organisations representing civil society in the UK, France, Albania, Czech Republic, Serbia and Denmark. The visit was organized jointly with SOLIDAR member Progressive Hungary, and this report aims to present a rolling coverage of the two-day event and its implications for civil society in Europe.

Sat on stacking chairs in the first floor of the Aurora Community Centre in Budapest’s multicultural eighth district, participants from the SOLIDAR Foundation network were waiting for the first Hungarian speaker to arrive. Known as the most dynamic cultural centre in the city, Aurora is home to a number of NGOs which focus on social inclusion and participatory democracy, and hosts various events for strengthening civil society.  Helped in part by the Soros-funded Open Society Foundation, the centre hosted the SOLIDAR Foundation network to discuss the pressure put on civil society and individuals.

Act 2: “The Sargentini report restores our trust in the EU”

After having tasted the paprika-based vegetarian lasagne cooked by local youth workers in Aurora, SOLIDAR members attentively listened to pensioners’ advocacy campaigner Kutiné Ágota Csurgai from KNOE. The Hungarian pensioners’ pressure group represents 6,112  members mostly comprising of retired servicemen (such as civil servants, the military, policemen or miners) whose pensions were restructured under legislation enacted in 2011, abolishing the early old age-pension and benefits inherited from the Socialist regime.

“Despite lodging mass applications – over 1,260 – to the ECHR and taking it to the street to protest, our campaign has achieved little success at the European and national level, making an important part of our members lose faith and leave the association,” explains Csurgai. With claims of a fundamental rights’ infringement made to fill up state coffers, most cases lodged at the European Court of Human Rights (ECHR) and the European Court of Justice (ECJ) have been dismissed on subsidiarity or proportionality grounds. And yet, as Curtai dwells on future prospects, “in the past eight years not much has happened. With the recent two-thirds majority in the EP, the Sargentini report restores our trust in the EU.”

With Dutch Green MEP Judith Sargentini reporting that the minimum old-age pension is “inadequate”, the abolition of early pensions in Hungary goes hand in hand with severe cuts in social protection for the unemployed as well as in education, the renationalisation of the private pension pillar and the neglect of equal opportunities. This has led to a further polarisation of society, deepening poverty, growing insecurity and a rise in emigration.

Act 3: The Central European University in disarray over legal limbo and removal of specific courses

The next stop for participants was the Central European University (CEU), known to have been the main target of the anti-Soros law since its adoption. Founded by George Soros after the end of Communism and viewed as a strong promoter of independent scholarships, the university has had to adapt to two new legal requirements aimed at foreign universities by opening a branch in its “home state” of New York while securing a bilateral agreement from the U.S. government. The CEU is one of the wealthiest universities in Europe, with 90 per cent of its students as international students and staff having international academic and professional credentials. Speaking in her personal capacity, CEU Public Policy Professor Agnes Batory tells SOLIDAR Foundation that these new legal requirements have set tougher conditions which have made operating the university more difficult.

“The 25 per cent tax on revenues from any organisation that might support or promote migration is a very serious financial obstacle for many NGOs with branches abroad,” Batory explains. “A very large proportion of our funding comes from US endowments through the Foundation but also from European competitive research funds, in line with the 2020 Horizon project.” With the banning of gender studies to the removal of inclusive refugee programmes,  the pressure on universities and in particular the foreign-funded CEU and the modification of Higher Education legislation in Hungary have put a financial and self-censorship strain on formal education establishments.

Going back to Aurora in the afternoon, we meet with Hungarian Green MP Bence Tordai, a long-time activist who has been a prominent member of  the opposition for more than ten years, as he tells us about the paradoxical situation created in Hungary.  “In Hungary, we have many GONGOs, NGOs that are publicly or more discreetly funded by the government to implement its priorities, while real civil society is forced to seek foreign donors”. Bence Tordai and his assistant are clear about the reasons leading to political fragmentation and the lack of coordination between and across opposition parties in Hungary. Competition between parties, power games, and the lack of topical issues to bring a united front against the Fidesz party are all barriers to the resistance inside the country.

Éva Pákozdi, from the Hungarian European Women’s Forum (MENOK), also confirms the political fragmentation of the Hungarian opposition, as “parties do not coordinate and assume priority on counting votes.” For MENOK, election law remains a major problem as the first past the post election system has brought discontent over Orban’s victory in polls.

However, Pákozdi warns about the future: “We cannot continue like that because clearly we have an opposition issue, so it’s a good push for parties to coordinate.” What transpires from the discussion is that both would like more support at the European level in the coming  years, from a political perspective such as with the Sargentini report and with financial support, as MENOK speakers had little knowledge  of EU funding available.

For dinner, all participants from the SOLIDAR Foundation network met in the city centre to eat local Hungarian dishes. Members from Terres des Hommes joined to introduce their work on migration and child protection in Hungary and Europe to create a regional knowledge-base on child protection while improving research and capacity-building. Terre des hommes, with its headquarters in Switzerland, has historic branches in Budapest that coordinates work in the region.  The recent legislation presents a problem but they have to seek ways to remain in Budapest and continue their work with partners to create regional projects, synergies and develop transnational solutions to problems such as child trafficking or the protection of children on the move.

Act 6:  Visit to the Romaversitas Foundation: strategies and methods to combat segregation of Roma pupils

The second day begins with a visit to the Romaversitas Foundation, the first comprehensive support and training programme for talented Roma youngsters in Hungary. As Dr. Dinók Henriett tells us, Romaversitas has supported over 300 Roma students throughout their academic studies to graduate and become highly skilled professionals in various fields. The foundation is more than a mere education platform, Dinók says, as bright and formerly segregated students in the traditional Hungarian school system have the opportunity to develop critical thinking, solidarity and active participation as well as values learned through the programme. “For example, in our secondary school programme higher education students and our alumni support, train and mentor their younger peers during their journey towards academic-level studies.” Despite providing support for integrating Romani high school and college students in the labour market, the organization is on the list of Orban’s enemies and fears that other similar organisations are viewed as “anti-Hungarian” by the government, possibly preventing them to access public investment.

In the afternoon, we meet with Aurora’s manager who tells us about his struggle to keep the community space open and accessible to all in the face of  local police pressure and persistent anti-Semitic attacks in recent years. Adam Schonberger is accompanied by activist and human rights expert Nóra Köves, who tells us about the fear she and other civil society activists felt when discovering they had been blacklisted by the Hungarian magazine Figyelő as ‘Soros mercenaries’. Köves is editor of the human rights quarterly Fundamentum and has stopped activities to work on a book on migration, which as she warns “might put me at risk with the government’s new anti-Soros law that punishes individuals “promoting” or even talking about migration.”

Our study visit ends with a meeting with Hungarian economist and former Commissioner for Employment, Social Affairs and Inclusion László Andor. Mr Andor’s proposal to enforce EU authority upon Hungary is straightforward: EU funding should be linked to respect for the rule of law.

“The change in the MFF should be possible to apply in the current MFF,” he explains, “as Orban can still win another election before 2021 using EU funds to feed his business and political clientele, friends and family.” Andor also emphasizes the importance of the European Public Prosecutor’s Office, which “should be an obligation and not an option” for Hungary which has maintained its refusal to take part in enhanced cooperation to establish it. Citing the Commission’s Greek Task Force as a precedent, the former Commissioner stressed the need to implement a different type of fund management for countries in which “the government itself organizes the abuse of funds, as shown in the European Anti-Fraud Office (OLAF) past investigations”.

We return to Brussels with very mixed feelings. Many times we heard about the widening gap between civil society organizations and political parties of the opposition, which is alarming and leaves many activists feeling hopeless about finding a political solution to their precarious situation. On the other hand the Sargentini report, that many of the activists were able to read online  - as the Orban-owned or influenced media censured the topic – has sparked  new hope that the answer to their problems can come from outside Hungary. As European civil society organizations we will stand close to the Hungarian activists and advocate for an EU response to the situation. The proposal for a Council decision will now be sent to the EU Member States that will vote on taking further actions. However, the European far-right is well organized and Orban has already secured support from some heads of government who will back up his practices in the country. At SOLIDAR Foundation we will continue supporting activities contributing to social justice in Hungary and continue to urge policymakers to unite and take action. 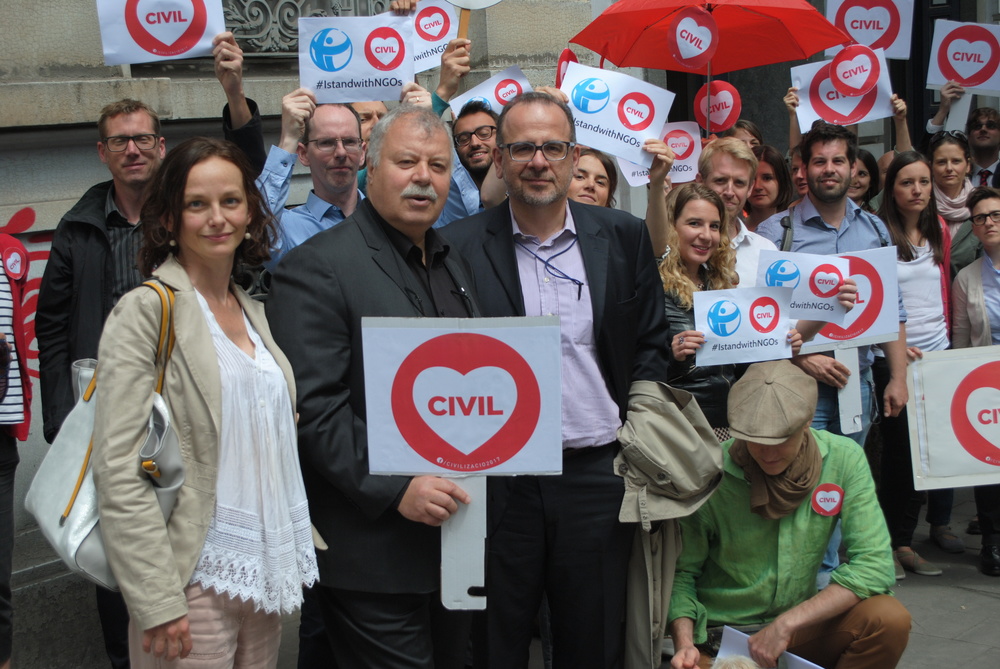