SOLIDAR Foundation is launching a new strategy for promoting citizenship participation and progressive education within Europe to make active and meaningful democracy a reality for all.

We have long been told that Europe is the quintessential example of democratic values and freedoms. A place where citizens enjoy the right to participation, have the possibility and responsibility to care for those in need and to engage in development cooperation and humanitarian aid. But it should be blatantly clear for everyone in these times of multiple crisis that this exceptionalist and neo-colonialist narrative has always been utterly false. The pandemic held up a magnifying glass and mirror that exposes all the persistent inequalities, injustices and deficiencies of our societies and democratic system and of the European project. Agenda 2030 is equally desperately needed here as anywhere else, as is the knowledge of our role in a world system defined by exploitative value chains and disregard for both people and planet. This lack of understanding also among progressives was recently exemplified in criticism of US Congresswoman Alexandria Ocasio-Cortez for charging 58 dollars for sweatshirts embroidered with the slogan ‘Tax the Rich’. Her response was simple and eloquent: this is what merchandise produced by unionised labour costs.

The EU has committed to a Green Deal and a just transition but is not yet ready to engage in the structural change needed nor is this understood by all. Many disadvantaged and precarious workers lack the skills and competences needed to be part of it, and the education system is not preparing the younger generations to sustainable socio-economic development. Nobody can be left behind if the planet is to be saved and if Europe is to stay true to its founding values. All must have equal opportunities for lifelong and life-wide learning to be included in a sustainable society. This is the focus and the purpose of the new strategy for SOLIDAR Foundation.

The magnifying glass of the pandemic not only shows us the great regional, generational, race, gender and class-based divides in terms of access to health, social security, education, and digitalisation, but also the effects of widespread environmental disregard and the backlash of democracy. We have slipped back in history into a mainstreaming once again of the populist and autocratic far-right, where civic space is shrinking rapidly in several countries and to the reactionary opposition to progressive values. Poland’s ruling party, PiS, is running a horrendous campaign against women and the LGBTQI+ community which culminated with an abortion ban. Viktor Orbán, in Hungary, is putting his crusade against democratic freedoms ahead of EU’s future, encouraging divisions and blocking shared positions, demonstrated most recently by holding the new long-term budget hostage due to the rule of law provision associated with it. These models will hold us back in a regressive culture, incapable to lead us to a sustainable future. Intercultural education, global education, progressive education linked to class, sustainability, intersectionality, gender, and critical thinking is what’s needed. We need this to be able to face future challenges and to mobilise in support of democracy and progressive values. Non-formal and informal education providers have long since identified and pushed for this, in many countries also in Europe endangering their own security and safety. It is no coincidence that this re-emerging far right, as their predecessors makes culture and popular education their primary battle grounds, going after progressive associations and trade unions.

The mirror demonstrates the divides in access to information and knowledge, and its sometimes-deadly consequences. Socio-economically disadvantaged learners do not receive the modicum of education to actively re-join the society, and this lack of education had less than 70% of young learners aware of global pandemics just before COVID-19 struck, making them and our societies seriously unprepared. The same lack of critical thinking and education allowed for baseless propagation of COVID-19 conspiracy theories, which have cost the lives of many.

The aggressive form of neoliberal capitalism prevailing in our societies is, in the words of UN Secretary General, killing our planet and tearing our societies apart. It promotes austerity policies that lead to cuts in education and public welfare, disenfranchising the many. It considers citizens not primarily as humans but rather put their value and rights in direct relation to their productivity, opening to the perspective of our societies most marginalised, such as migrants, as cheap labour, or worth nothing at all. It gives precedence to the logic of the lowest possible unit cost justifying the exploitation of workers and communities at home as in other countries. At the same time, the concentration of wealth has never been higher and taxation and appropriate regulations never weaker, rendering most global companies with the impunity to do as they please. This all sounds insurmountable. This sounds like a system setting us all up to fail.

But people organise, protest and rebel. And so the pandemic has also demonstrated the most solidaric and sympathetic side of us. New and old organisations, local community groups, trade unions, youth organisations, environmental groups, and mass movements have all been engaged in the work to offer help, step in where society fails, to find alternatives and come up with creative solutions, build resilience and to fight for their rights. Global citizenship education, workers’ and popular education, digital citizenship education have been central and continue to be at the forefront in this work.

SOLIDAR Foundation’s membership are part of this movement, and together with our members we will strive to provide a real educational alternative to increase resilience, encourage an enlightenment for the 21st century, counteract the far-right ideology and expose neoliberal thinking. It is high time for our progressive network and SOLIDAR Foundation to scale up our work on progressive education to ensure that all are empowered to participate in society while promoting equal opportunities for all.

SOLIDAR Foundation shall strive to be a learning house to support progressive movements, civil society organisations, trade unions among others in developing the tools and competences needed to reclaim Europe’s future. Agenda 2030 remains at the core of our work, and this strategic orientation reframes our ethos against challenges that our membership and their constituencies are facing. The altered civic space for non-formal and informal education requires a serious rethinking of how we prioritise global citizenship education and progressive education to make sure we also tackle Europe’s realities. SOLIDAR Foundation will ensure that this forms part of the initiatives associated with the European Education Area and the European Democracy Action Plan, as well as the upcoming Conference on the Future of Europe.

Lifelong and life-wide learning lifts us from all types of poverty, material and not, and frees us. Education does not only belong to the formal setting; it has a place as one of the cornerstones of a democratic society and as such it also belongs to non-formal and informal education too. The work of SOLIDAR Foundation for progressive education and citizen’s participation is for them.

Soon you will find more about the upcoming SOLIDAR Foundation’s new strategy. 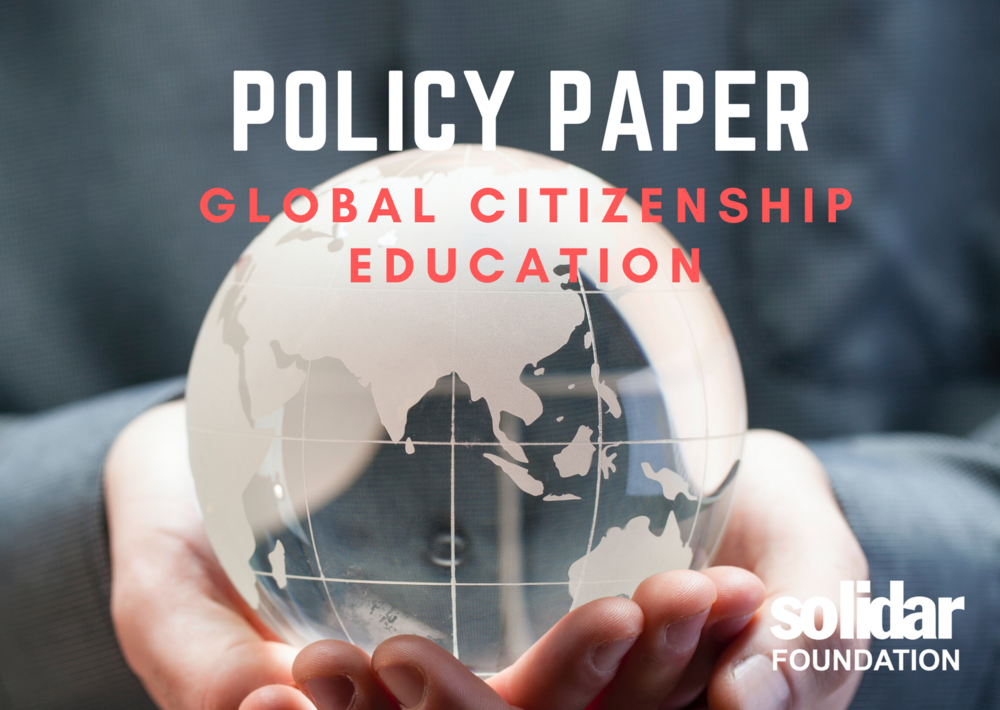