On 3-5 November 2021, SOLIDAR organised its second Study Visit of the year, hosted in Tetovo, North Macedonia, by SOLIDAR member Community Development Institute (CDI). The activity was titled ''Social Inclusion of people in situations of vulnerability'' and had the objective to showcase CDI's work, in particular with people at risk of social exclusion but not only as a strong inter-ethnic relations component was also present, as well as foster exchange and sense of community within the network. A total of 13 people participated in this on-site exchange, representing 6 SOLIDAR member organisations : Liga Española de la Educación, Movimiento por la Paz - MPDL, Johannes Mihkelson Centre, Centre for Labour Rights, Initiative for Development and Cooperation (IDC) and the hosting member CDI. 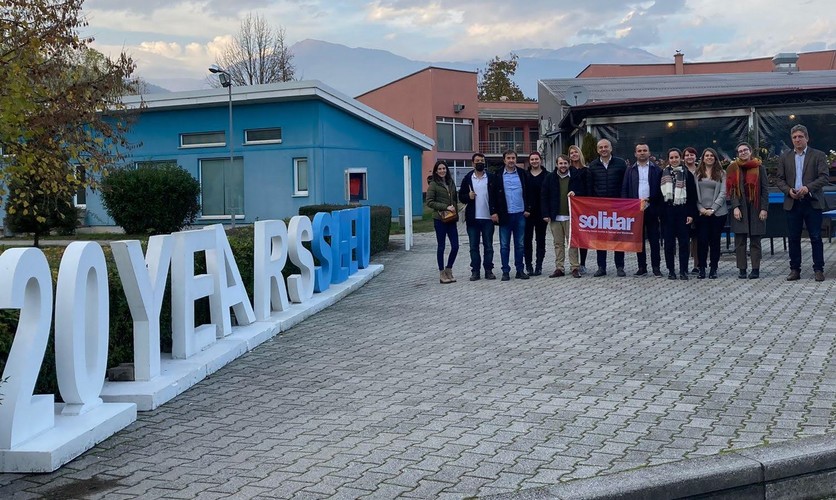 CDI presented several channels of their work. On inter-ethnic relations, they carry out advocacy to improve the transparency and inclusiveness of the Committees for inter-ethnic relations, which are bodies set up to guarantee the representation of non-majority ethnic groups in local decision-making. They also provide capacity-building for municipal councilors, training them on working with these Committees and on inter-ethnic relations in general. CDI also offers an array of facilities or VET trainings, for people in vulnerable situations or organisations working on labour insertion of such beneficiaries: audio-visual production, carpentry, baking, welding, etc. Several CDI partners intervened as guest speakers, such as the Dean of the South East European University Tetovo campus, or educators working with disabled children and youth.

Eventually, the last day of the Visit highlighted also the current and potential synergies between SOLIDAR EU members and SOLIDAR Western Balkans members on enlargement aspects. There are lots of opportunities to share knowledge and do joint advocacy, towards both the EU and the national levels, for social policies to be a stronger focus in accession processes. Members present also reiterated their commitment to working with SOLIDAR on promoting inclusive and rights-based migration policies in Europe.

SOLIDAR would like to warmly thank CDI and its director Sreten Koceski for the invitation and for organising the activities, as well as CDI partners South East European University, Bekim Memeti and Aleksandra Jakovchevska, and all our members who participated.

This activity has been executed in the framework of the programme ''Together For Social Europe'' with the financial support of the European Union.