#SOLIDARityWithCGIL: Fascist and violent actions have no place in a democratic country!

JOIN OUR SOLIDARITY CAMPAIGN WITH CGIL, more details below

On Saturday, 9 October 2021, a group of violent protestors affiliated to the far-right party Forza Nuova, well known for its fascist views, attacked the Rome headquarter of SOLIDAR’s member CGIL, the oldest and biggest trade union movement in Italy.

The group left the main, unauthorized protest, of the no vax/no green pass movement, which it had infiltrated, and headed for and attacked the CGIL building. As a result, the offices were damaged and trashed, windows and computers broken and the whole place left upside down. This violence, which has been defined as an “attacco squadrista”, echoes the modus operandi of the fascist movement at the beginning of fascism in Italy 100 years ago. The two main initiators, leaders of Forza Nuova, have been arrested, together with other 10 people.

We express our deepest and strongest solidarity with our member organization CGIL and we condemn these acts of violence that fundamentally threaten the basis of a democratic state based on rule of law and human rights.

The fascist attack brings back painful and horrifying memories of a dark period in Italy’s history and collective memory. It is also a blunt reminder of the fact that similar acts form an intrinsic part of anti-democratic and anti-rights movements that are gaining force in Europe. Groups like this and the ideologies they represent are present within the chambers of Parliaments of many European states as well as in the European Parliament. Their presence and existence, their resilience and increasing boldness, are symptoms of a trend that has grown in strength ever since the 2008 financial crisis. It feeds on socio-economic inequalities, insecurities, a crumbling welfare state that leaves people behind with a sense of disenfranchisement and fear easy to capitalize on. If not understood and addressed properly by democratic and progressive forces, these symptoms quickly result in a chronic disease that will erode the democratic texture of our countries, shrink civic space, and encroach fundamental freedoms and rights. We have seen this happen in Poland and Hungary in recent years.

We must not address these violent events of fascist actions as isolated cases. Our movements must spare no efforts in deepening the relationship with our constituencies and dialogue with our elected representatives. Civil and social dialogue must be reinforced and strengthened at local, national and EU level. Mutual solidarity and progressive reforms are the cure, a strong civil society, and a deepened social contract the vaccine.

On Sunday, all over Italy, people stood in front of local sections of CGIL to show their solidarity and support. Faced with such violent actions, solidarity firm condemnations are key immediate answers to protect the democratic tissue of a country. It must be said loud and clear across Europe, that fascist actions of any kind cannot be tolerated.

CGIL, CISL and UIL are organizing a national antifascist mobilization on Saturday, 16 October 2021, in Rome. Join if you can and show your solidarity in other ways, if you cannot. More info: http://www.cgil.it 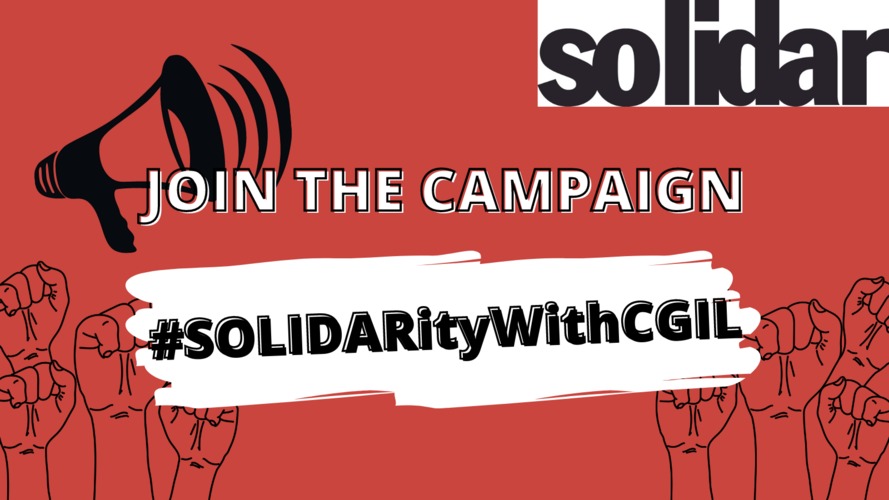 Solidarity is key to show anti-rights and fascist movements that there will be no impunity for their actions. After the episode of violence that hit SOLIDAR’s member CGIL, the Italian General Confederation of Labour, SOLIDAR wants to launch a campaign of #SOLIDARitywithCGIL and calls for its member to join this action too!

SOLIDAR’s family can make their voice heard and show support and solidarity when a member is in need!

Let’s amplify each other’s voices, let’s overcome fascist violence with progressive faces and messages. Let’s show CGIL and its workers and the millions of people they represent that they are not alone. What better way to show it than putting your face on this call for solidarity.

How you can act:

Take a selfie/picture of yourself and/or the staff of your organization with a piece of paper with the hashtag #SOLIDARityWithCGIL.

Share it on your social media channels with your message of support for CGIL and tag on Twitter @cgilnazionale and @SOLIDAR_EU and on Facebook @CGILsindacato  and @Solidar.org.

SOLIDAR will reshare and retweet the posts where we are tagged.