On occasion of today’s EU-Algeria Association Council, Front Line Defenders, EuroMed Rights, FIDH and OMCT, under the Observatory for the Protection of Human Rights Defenders, and SOLIDAR call on the EU to address serious violations of human rights by Algerian authorities, particularly against human rights defenders (HRDs) in this country. One year after Algeria adopted constitutional reform in parliament, the number of serious violations of human rights committed by Algerian authorities is increasing. The undersigned organisations take the opportunity of the EU-Algeria Association Council to highlight some of the latest documented violations and their impact on HRDs.

The EU had long pushed for constitutional reform since bilateral relations between both countries were established 15 years ago. Although the reform took place in 2016, the new constitution does not represent progress towards consolidation of public freedoms and human rights. The exercise of freedom of assembly, freedom of association, and freedom of expression is still considerably hampered by restrictive legislation and political interference on the judiciary.

Kamal Eddin Fekhar, who works on the rights of Mozabite citizens in Algeria, is currently facing over 18 charges for his human rights work. One of the charges against the HRD accuses him of calling for peaceful protests to advocate for minority rights in Algeria. Kamal Eddin Fekhar is currently on day 70 of hunger strike against his arbitrary detention. At this point, he is facing long-term serious health complications as a result of the hunger strike. The HRD is also accused of forming a “harmful” organisation that was deemed as such because it conflicts with Algerian “national values.”

The obstruction of Kamal Eddin Fekhar’s work by Algerian authorities through imprisonment is also linked to a trend of targeted campaigns against HRDs as a direct result of their work on ethnic, religious and sexual minorities, as well as indigenous rights, including HRDs belonging to Mozabite and Kabyle groups. Two of his lawyers, Noureddine Ahmine and Salah Dabouz, are in return victims of judicial harassment for defending him while Dabouz is now placed on judicial review. Slimane Bouhafs, also a human right defender who supports the right to self-determination of the Kabyle people, is currently purging a 3-year prison sentence for ‘insulting Islam and the prophet Mohammed’. The Appeal Court of Sétif condemned him on September, 6, 2016.

On December 25, 2016, human rights defender and trade unionist, Fouad Hassam, was dismissed by his employer facing pressure from public authorities with the aim of sanctioning him for his recent mobilization against the collective expulsion operations of more than 1,400 migrants in December 2016 from Algeria to Niger. Human rights defender and journalist Hassan Bouras, member of the Algerian League for the Defence of Human Rights (LADDH), has extensively reported on corruption and the practice of torture in Algeria. As a result, the HRD spent more than three months in provisional detention following charges that include ‘insulting state institutions' on social media. He was only freed on January 18, 2017, after the appeal court reduced his sentence to a six-month suspended jail term.

In another case regarding freedom of expression, a freelance journalist residing in the United Kingdom, Mohamed Tamalt, returned to Algeria mid-2016 and was arrested a few days following his arrival for his critical writing targeting Algerian authorities. The journalist began a hunger strike to protest the arbitrariness of his detention and a few months later he died under suspicious circumstances in detention. His family reported that in one of their visits to him, there was a scar on his head. It was only after his death that the Minister of Justice stated that the judicial authorities accepted the application to investigate the injuries submitted by his family.

More recently in the past couple of weeks, human rights defender and blogger, Anouar Rahmani, was questioned by Algerian police and could now face charges for his writings that promote basic rights such as freedom of thought, expression, and religion. Last year, on 1 June 2016, he received anonymous messages threatening him with death, should he file a complaint against a national newspaper which previously accused him of blasphemy. Also, we would like to highlight the arrest of Rafik Belamrania, detained since 20 February 2017 for criticising the government and various authorities on his facebook page.

It is important to note also that a number of international human rights groups have attempted to visit Algeria on numerous occasions, but were refused, or otherwise did not obtain, entry visas. Foreign journalists also face difficulty in obtaining visas to visit the country. A number of requests for a country visit by United Nations special procedure mandate holders remain pending.

As stated in a letter sent to EU officials on 24 February by seven international organisations, ahead of the 10th session of the EU-Algeria Association Council, the EU must amend the Partnership Priorities so that they represent a real commitment on the part of the EU and its Member States to ensure that Algeria promotes and protects human rights and its defenders.

We call on the European Union to make use of the political momentum to push for meaningful progress in the areas mentioned above, and in particular to urge Algerian authorities to:

Review legislation governing the right to freedom of expression and assembly, in particular by repealing the decree prohibiting any form of public demonstrations in Algiers since 2001, and introducing a system of simple notification for public demonstrations instead of a prior authorisation system, as already recommended by the UN Special Rapporteur on the promotion and protection of the right to freedom of opinion and expression;

Cooperate fully with the Human Rights Council, including with its experts or special procedures, including by responding promptly and favourably to their requests for visits, issuing and honouring permanent invitations to experts and United Nations human rights working groups, and by promptly implementing their recommendations;

FIDH, under the Observatory for the Protection of Human Rights Defenders

World Organisation Against Torture (OMCT), under the Observatory for the Protection of Human Rights Defenders 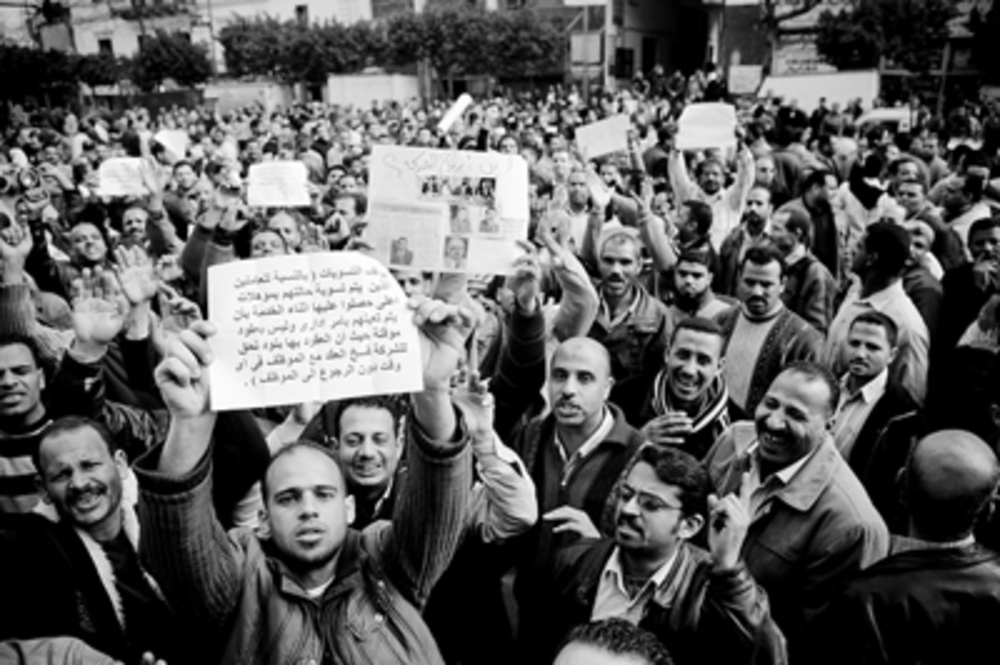 European Parliament Resolution on Algeria: One Year After

SOLIDAR calls for the release of nine activists for the right to work arbitrarily arrested in Algeria!