On Tuesday evening we held our Silver Rose Awards for the fifteenth time. As every year, it was an opportunity to bring together SOLIDAR’s members, friends and partners to be inspired by the bravery of the Silver Rose Awardees. Nearly 200 of our friends gathered for this evening in the European Parliament, which could also be followed online, where the very personal and sometimes emotional stories of the winners were in the spotlight. The stories they shared with the audience reflect their remarkable strength and courage to stand up for what they believe is of grave importance to advancing social justice in Europe and worldwide. The six winners, from all over the world, seem to have one common motivation, which is to contribute to making the world a more just place, where disabled people are a great contribution to society, where gender violence comes to a halt, where women are no longer discriminated at their workplace, where every child regardless of their legal status enjoys the right to education, where tax justice allows a society to prosper and where solidarity is at the core of how we live together. Francisca Sauquillo, SOLIDAR President and Chair of the Silver Rose Jury, opened the evening by underlining the importance of the event, at which the undeniable impact of civil society organisations takes centre stage.

Stilian Balasopulov, representing the National Union of Workers Producers Cooperatives (NUWPC), received an Award in the Together for Social Europe category. For 120 year the NUWPC’s work illustrates the very tangible positive impact that the organisation’s activities have on the lives of people with disabilities in Bulgaria and how their inclusion contributes to the well-being of their national economy. The work carried out by the NUWPC focuses solely on giving people with disabilities the chance to become part of their society and participate actively, which is not merely beneficial for the Bulgarian economy, but most importantly for the self-esteem of those people involved.

The second prize in the same category was accepted by Joaquin Taboada who came to represent the organisation he and his three children have set up, the Soledad Cazorla Prieto Fund. The fund bears the name of his wife who was one of the first prosecutors of men who killed their wives in Spain. With the support of the beneficiaries of the fund they are able to come to the aid of those orphans whose mothers were killed as a consequence of domestic violence. To improve the situation for orphans and victims of domestic violence in Spain and in Europe, Mr. Toboada called upon the policy makers in the room for a report that included further steps on how the protection of victims of domestic violence could be improved.

For the next award, in the category of Organising International Development, we were joined by Elena Luz Camacho who came all the way from Colombia to accept the award. As a lawyer and activist Mrs. Camacho helped to fund the trade union Sintraimagra that offers legal help to domestic workers. The trade union comes to the aid of thousands of women who decide or are forced to give up their own lives to live with and serve other families. The cases that Sintraimagra deals with mainly concern domestic workers faced with humiliating conditions, either occasionally or systematically, where they are often exempted from any labour rights during or after their service.

From France we were joined by Virginie Tiberghien, who as a teacher, together with her colleagues started a unique school for children of all religions and nationalities in the middle of the refugee camp in Calais often wrongly called ‘the jungle’. She came to Brussels to accept the Building Learning Societies award for the work they have been carrying out in the framework of the L’Ecole Laique du Chemin des Dunes. In her acceptance speech she explained that they were motivated not only by the desire to grant every child in the camp their right to education but also to offer the children the opportunity to socialise with their peers, which contributed greatly to their sense of hope and joy after their stressful journey to France. The presenter of the award Jeppe Kofod (Vice-Chair of the S&D Group) stated “We can only be credible if we take care of the most vulnerable” and expressed the hope that European society will be finally able to deal with this challenge.

The next Award was introduced by this year’s Silver Rose Jury, in recognition of an outstandingly courageous deed that reflects a great sense of social justice at a time when growth is often put before people. Our Belgian member Solidarite Socialiste and French Member La Ligue de l’enseignment backed the nomination of Antoine Deltour who received the Special Jury Award from Silver Rose Jury Member, Ralph Coeckelberghs. Mr. Deltour is the whistleblower behind the LuxLeaks, and continues to show great courage. Legal proceedings against him are in full swing, but he is facing this situation with enormous optimism, determined to clear his name and underline the need for protection for whistleblowers in general. During his speech, he reminded everyone that whistle-blowing is a horizontal issue that can shed light on terrible practices in many sectors of life and he urged the European Commission to move swiftly on the proposal for European Protection for Whistleblowers. He was convinced that in the room, full of people who all shared similar values, most of us would have done the same in a similar situation. Mr. Coeckelberghs emphasised the importance of this particular award, calling for more tax justice through which all the cases highlighted that evening could be further pursued, knowing that the resources held back from the state due to tax evasion could have been better spent on education, better working conditions for domestic workers or the social inclusion of people with disabilities.

The last, but definitely not least, Award of the evening was presented, accompanied by huge applause from the audience, to Miguel Angel Martinez Martinez who was granted this year’s Lifetime Achievement Award. He is a Spanish politician, activist and, as he described himself, a non-believer, who has dedicated his whole life to the humanitarian cause and fighting for justice. In accepting the award he assured the audience that he was not going to stop striving towards his commitment for a better Europe. Zita Gurmai (PES Women), who handed him the Award, recited the long list of his achievements, and declared him a role model for a young generation. The audience visibly agreed by giving him a standing ovation.

SOLIDAR Secretary General, Conny Reuter, closed the evening by thanking the SOLIDAR Silver Rose Jury for their commitment and more importantly this year’s winners who, like every year, continue to inspire us to contribute to change, social progress and most importantly social justice. In addition, warm thanks were extended to the Group of Progressive Alliance of Socialists and Democrats in the European Parliament, the Party of European Socialists (PES) and EurActiv who have been long standing supporters of the Silver Rose Awards. We also express our gratitude to the European Parliament which is the patron of this year’s Silver Rose Awards and the S&D Group for including the Awards under their TOGETHER initiative. 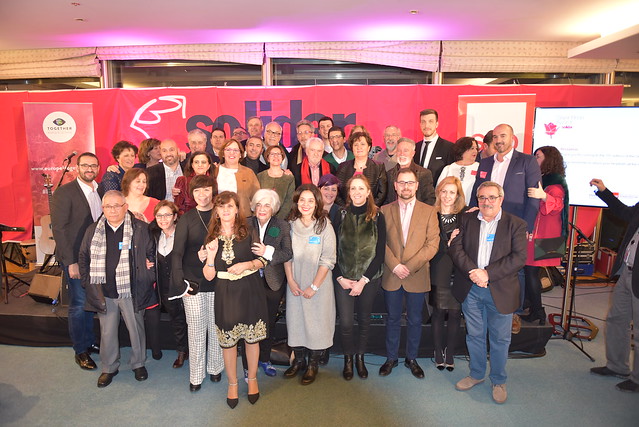 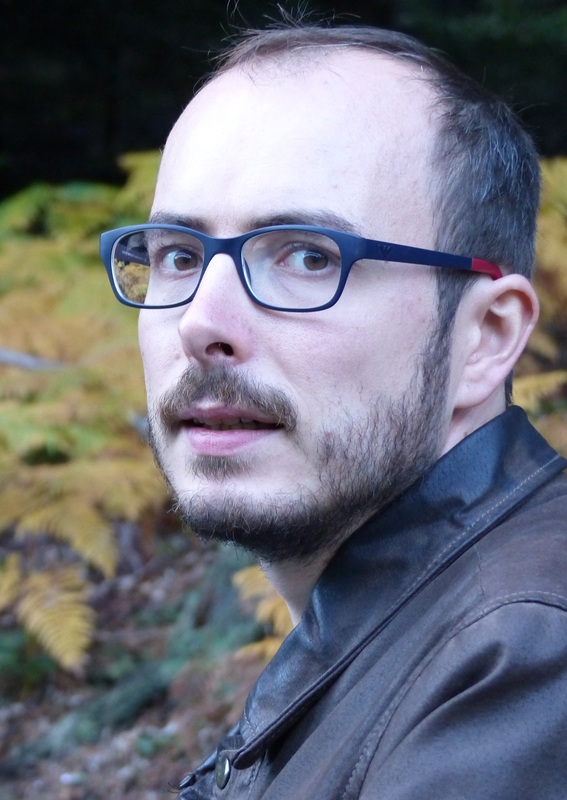 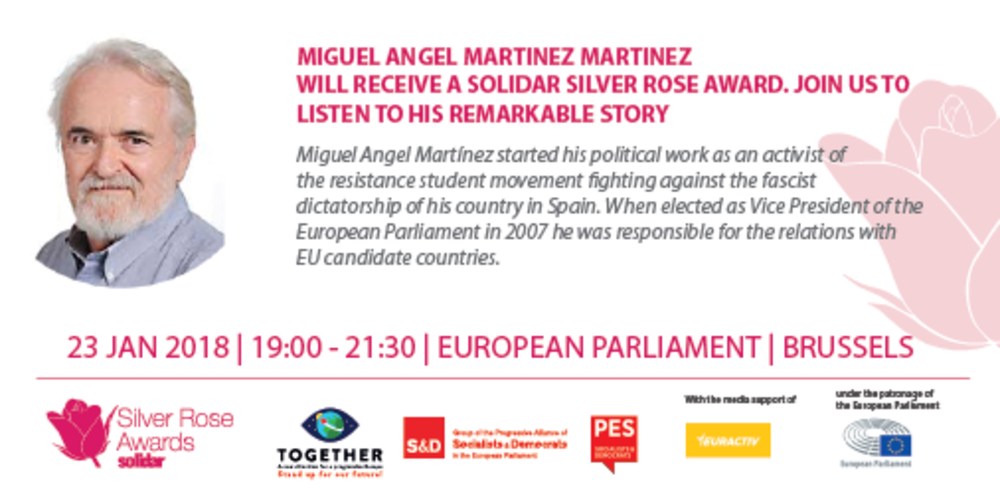 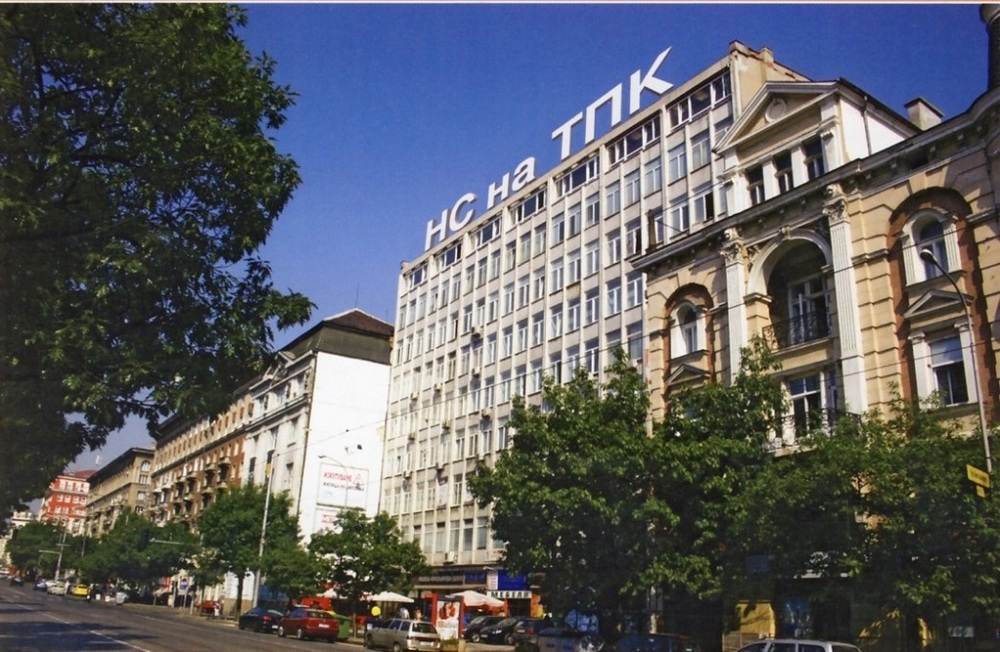 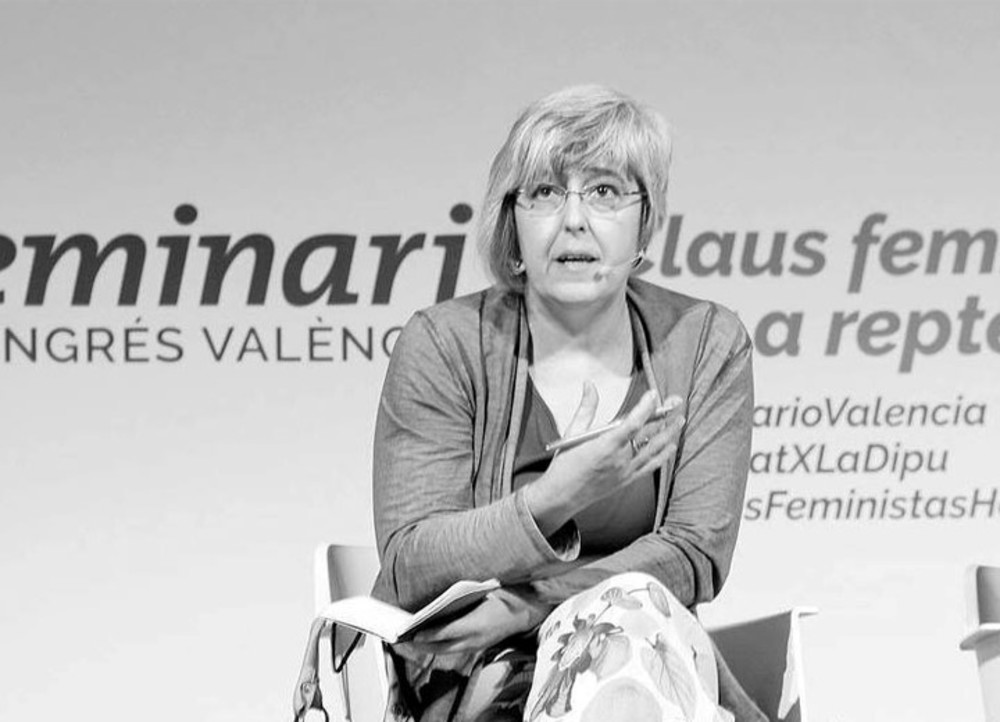