The candidate for the Republican People’s Party (CHP) Ekrem Imamoglu secured 54.21% of votes with the support of a diverse voter base in the re-run of Istanbul's mayoral election on 23 June - a far wider margin of victory (nearly 800,000 votes) than his win by 13,000 votes in March. It is almost 60 times greater than the March election results.

The Justice and Development Party (AKP) had called for a re-run of the poll after it complained of voting irregularities last March, the never-ending recount of the votes and delayed the delivery of Mr Imamoglu's certificate of election for 17 days.

İstanbulites said once again “enough is enough, it is time for change” on Sunday in the re-run of İstanbul mayoral elections. They've made their message heard loud and clear this time.

While Erdoğan's AKP suffered a major setback in the March local elections, the re-run of the election is a serious blow to AKP and Erdoğan as a divisive, populist, sectarian, polarising political figure. The people of Turkey have voted in favour of democracy, they have chosen pluralism over authoritarianism.

The victory of CHP's İmamoğlu has broken the Islamist parties’ grip on Turkey’s biggest city (16 million) and economic heart, İstanbul (which accounts for roughly 31% of the country’s GDP) for the first time in 25 years. Mayor-elect İmamoğlu has also broken a 35-year-old record for the highest number of votes by gaining nearly 5 million votes.

When all democrats in the political spectrum unite

Let's not forget that opposition parties campaigned at a disadvantage in terms of media appearances and resources, while the ruling AKP party’s candidate enjoyed full coverage by mainstream media and the backing of government resources. On top of all of this, İmamoğlu’s campaign suffered from concerted attempts at intimidation, threats and smear campaigns.

We also had to deal with fake news at levels never before seen in Turkey. The opposition figures and independent journalists were exposed to coordinated physical attacks. Despite all these disadvantages, smear campaigns and direct attacks, Mr İmamoğlu has won this election by a much wider margin. So it shows the determination of Turks for democracy and the citizens' clear response.

Record number of volunteers and a campaign financed by the people

İmamoğlu’s campaign mobilised 200,000 volunteers.  This includes lawyers, IT experts, students and many more.

According to Turkish law, the State Treasury does not provide any financial aid to political parties in elections that are being re-run. The CHP launched a donation campaign and it was inspired by the acts of voters who made donations to the CHP’s bank account with the comment, “Everything will be fine”, İmamoğlu’s campaign slogan, after the Supreme Electoral Council’s (YSK) controversial election cancellation decision. The campaign was financed by voters' donations.

The sinking economy and deteriorating democratic conditions were at the centre of voters’ concerns in the Turkish local elections held in March. Losing Istanbul and Ankara is an even broader sign of dramatically decreasing political support for Erdoğan. The perception of immense corruption and cronyism in the AKP municipalities has also moved voters away from Erdoğan’s candidates. Added to this, in the re-run of the İstanbul mayoral elections, the injustice against the opposition's candidate and the AKP's disrespect of the will of İstanbulites played a decisive role in the immense mobilisation of voters.

Turkey entered a recession in March. Youth unemployment is up to 30% while overall unemployment is over 10%. The Turkish lira lost its value substantially in 2018 and the free-fall continues. Inflation has reached 20% in recent months.

During the whole campaign process, Erdogan has become increasingly desperate because of his declining votes and the AKP candidate's nosedive in the polls. Let’s not forget that the AKP had failed to secure a majority alone in parliamentary elections in June.

Erdoğan's obsession for İstanbul, the country’s financial hub can only be understood through the ruling party's obscure political financing model and dramatically growing perception of corruption in the country. İmamoğlu’s 18 days in office was enough to expose wasteful spending by the government under the leadership of the AKP. Documents also revealed that millions of dollars from Istanbul Municipality's budget had gone to foundations with ties to Erdoğan and his family.

Upon his appointment as the newly elected mayor Ekrem İmamoğlu announced that all municipal council meetings in Istanbul will be broadcast live through municipal social media accounts. “I promised [the people of] Istanbul. The transparency principle will be our priority. We will inform the public about all the developments. We will broadcast all municipal council meetings live,” he said.

The new service has caught huge public interest. The council’s first two meetings were watched by 3.5 million people online. The importance of the live broadcast became clear yesterday. It was a politically strategic move for the CHP who doesn't have a majority in the municipal council. CHP's proposed bills regarding establishing commissions to fight drugs and social gender equality were rejected by the AKP. After the live broadcast, the rejections by the AKP were harshly criticised on social media and by the public.

Following the reactions, one day later AKP members had to step back and accept the bills. Similar changes happened again, for example the nearly 50% reduction in the price of student public transportation tickets which was one of the most important promises made by İmamoğlu before the election.

The governing party forces made the election campaign conditions even harder, more unfair, more unjust for the opposition while they saw their own position decline in the opinion polls. We’ve never seen such a vile campaign period in Turkey’s history.

Erdoğan threatened lawsuits, the death-penalty for the main opposition leader Kemal Kılıçdaroğlu, and accused the opposition of criminality or terrorism.

Following the CHP's win in the initial elections in İstanbul, AKP intensified all its manipulations to whip up nationalist anger. As part of these efforts, a premeditated mob attack against the main opposition leader and CHP President Kemal Kılıçdaroğlu took place in the Çubuk district of Ankara during the funeral of a soldier who was martyred by the PKK on 19 April. Prosecutors launched an investigation into who perpetrated the attack. Police briefly detained nine suspects in connection with the attack, but all were later released. In a petition submitted to Parliament on 23 April, CHP deputy parliamentary leaders described the attack as a premeditated effort to provoke the locals who attended the funeral to commit violence against Kılıçdaroğlu, and questioned why the police had not intervened against the mob attack.

The sore defeat of Turkey’s AKP in the re-run of Istanbul’s mayoral race could pave the way to early general elections and ultimately bring an end to Erdogan’s rule which will be remembered as a dark era in Turkish history. We are at the beginning of this promising change. After the local elections, all of Turkey’s major cities are now run by the opposition.

Opposition’s Positive Campaign: Everything will be fine

The opposition alliance consolidated its votes across Turkey in the March local elections. CHP candidates won in almost all major cities; Istanbul, Ankara, Antalya, İzmir, Mersin, Adana, Aydın and many others across Anatolia. These cities mentioned here alone are home to 32 million inhabitants.

Opposition candidates’ campaigns were based on concrete projects, a vision for their cities offering hope, change and promising to create jobs, improve education and improve social services.

In a bid to reach out to wider segments of society during the March local elections, CHP implemented a brand-new communication strategy, called Radical Love.

CHP’s Remedy Municipalism Manifesto is the main guideline for its successful progressive municipalism for 21st century.

Please refer to our publication to learn more about our main principles.

Unique story of new campaign slogan:
"Everything will be fine"

How Imamoglu's campaign slogan "Everything will be fine" was developed is the unique story of this success and its strong citizen backing. Running alongside İmamoğlu’s campaign bus in March, a 14 year old boy, Berkay Gezgin, had shouted to İmamoğlu: “Don’t worry, brother Ekrem, don't worry, never give up! Everything will be fine.”

It became the campaign’s slogan, because it captured exactly the spirit of Mr. İmamoglu and his millions of supporters.

Millennials and Generation Z citizens were the driving forces behind the campaign. It was a pretty organic campaign on the ground and digital side.

Nothing will be the same after Istanbul win

İmamoğlu ran a very inclusive campaign in both elections in İstanbul, urging unity and solidarity rather than exploiting differences. He said in his victory speech “This victory opens up a new page in Istanbul. On this new page, there will be justice, equality, love. I want to thank each citizen of Istanbul. You have protected the reputation of Turkish democracy in the eyes of the world. You taught a lesson to those who would liken Turkey to countries in close proximity to us".

Nothing will be the same after the local elections and the results of the re-run of the İstanbul mayoral elections. By 2023 – when the next general election is scheduled – Turkey will be a very different country where everything is truly fine, people are happy.

"The world had given up on hopes of democracy in Turkey. They thought that democracy would not exist in Turkey anymore. Regardless of all this, we sent a democracy message to the world. Hence, they watch us with astonishment. Now the whole world is closely watching our culture and ambition of democracy. We said we can do this, because we have faith” CHP Leader Kemal Kılıçdaroğlu said at the CHP’s first parliamentary group meeting after its victory in the re-run of the Istanbul elections.

Europe should respond to Turkish citizens' determination for democracy by more engagement.

The international community and the EU have observed the whole process very closely. Now it is time to enhance cooperation channels with these victorious progressive municipalities of Turkey through twinning programmes, co-funding opportunities, sharing best practices, capacity building, EU and international funds. Supporting Turkish progressive municipalities to implement projects with a social and democratic dimension will not only better integrate Turkey into the international and European sphere, it will also contribute to "peace at home and abroad" as Mustafa Kemal Ataturk, Founder of Turkish Republic, once said.

CHP’s campaign motto “Spring will come at the end of March” came true. As we said, authoritarianism cannot prevent flowers from blooming. Everything is already on track to be fine.  Since 23 June, the people of Turkey are happier, more hopeful for the future. Democracy flowers are blooming across the country. 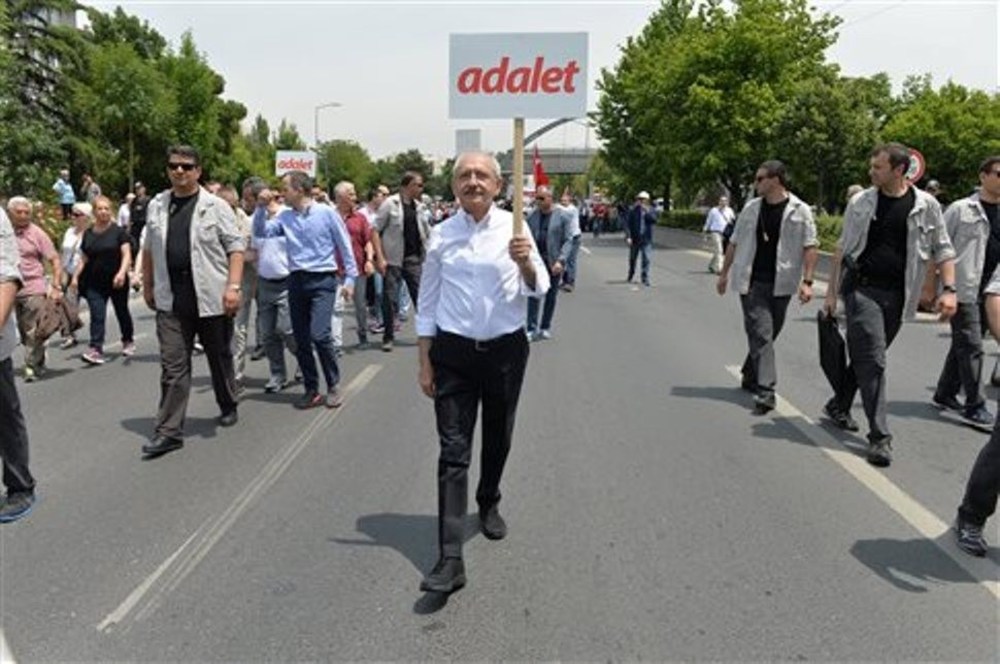 March for justice, 420 km from Ankara to Istanbul